Setting Up a Beehive Part 1

The art of backyard beekeeping began with the Skep beehive. Hopeful beekeepers would capture a swarm a place it in an upturned dome shaped basket. Because the bees have to be killed when harvesting the honey Skeps have become illegal in the United States. The familiar stacks of white boxes, the modern Langstroth hive, make beekeeping and harvesting honey safe for the bees.
Bees may seem intimidating but it really isn't that hard to produce your own honey. In a good year you can expect about five gallons of honey from a productive hive. Beyond typical culinary and medicinal uses, there are many wonderful products you can produce from honey and bees wax, candles, bath and body products, mead and wine just to name a few. 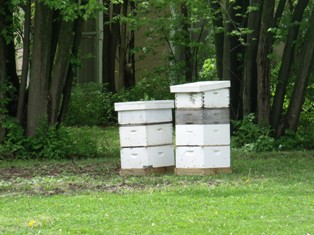 At the base of the hive is the Hive Stand. The hive can be set on a wood base or cinder blocks. The Bottom Board provides an entrance for the bees into the hive. The first and deepest box is a Hive Body. To get your hive established you'll eventually want two hive bodies. The hive body is where the bees live and you need a large colony to make enough honey to feed them and you. Within the hive body are ten Frames. The frames hold a wax or plastic Foundation which the bees will use to build their comb. The Queen Excluder is a screen that keeps the queen in the hive body while allowing the workers to pass through. The Honey Super looks just like the hive body but it is not as deep. The honey super is where the bees store the excess honey, the honey you will harvest. The supers also contain ten frames with foundation. The Inner Cover provides space between the hive and the bees. It provides some isolation and and a buffer which makes it a little easier to get into the hive. The Outer Cover is simply the roof of the hive.

Galen wants to get some bees...my Dad gave us some of his old hives, we just have to find the time to get them fixed up and read for bees, then we can get some ordered, or get some from a guy we know a little ways away from us. I'd love to have our own honey and beeswax, but not so sure about the bees. LOL Guess as long as I don't have to take care of them I'll be ok. :)

Taking care of them is easier than you think. It sound like you are ready to go, good luck Deb!

christy, this is absolutely wonderful! SOooo, that's how you do it! ;) you make me want to keep bees now... you make everything look so darn easy!
love you!
ox

Great info!! I can't wait to hear how yours goes! That is cool that we are doing the same thing too!

Your blog is so informative! I might try my hand at beekeeping once I have more land. :)

Christy
Long before we moved to the farm I began to practice art of farmstead living. To me it is a beautiful, simplistic lifestyle, baking bread, growing food, working with animals and making all sorts of wonderful things.

Promote Your Page Too

Visits to my Blog